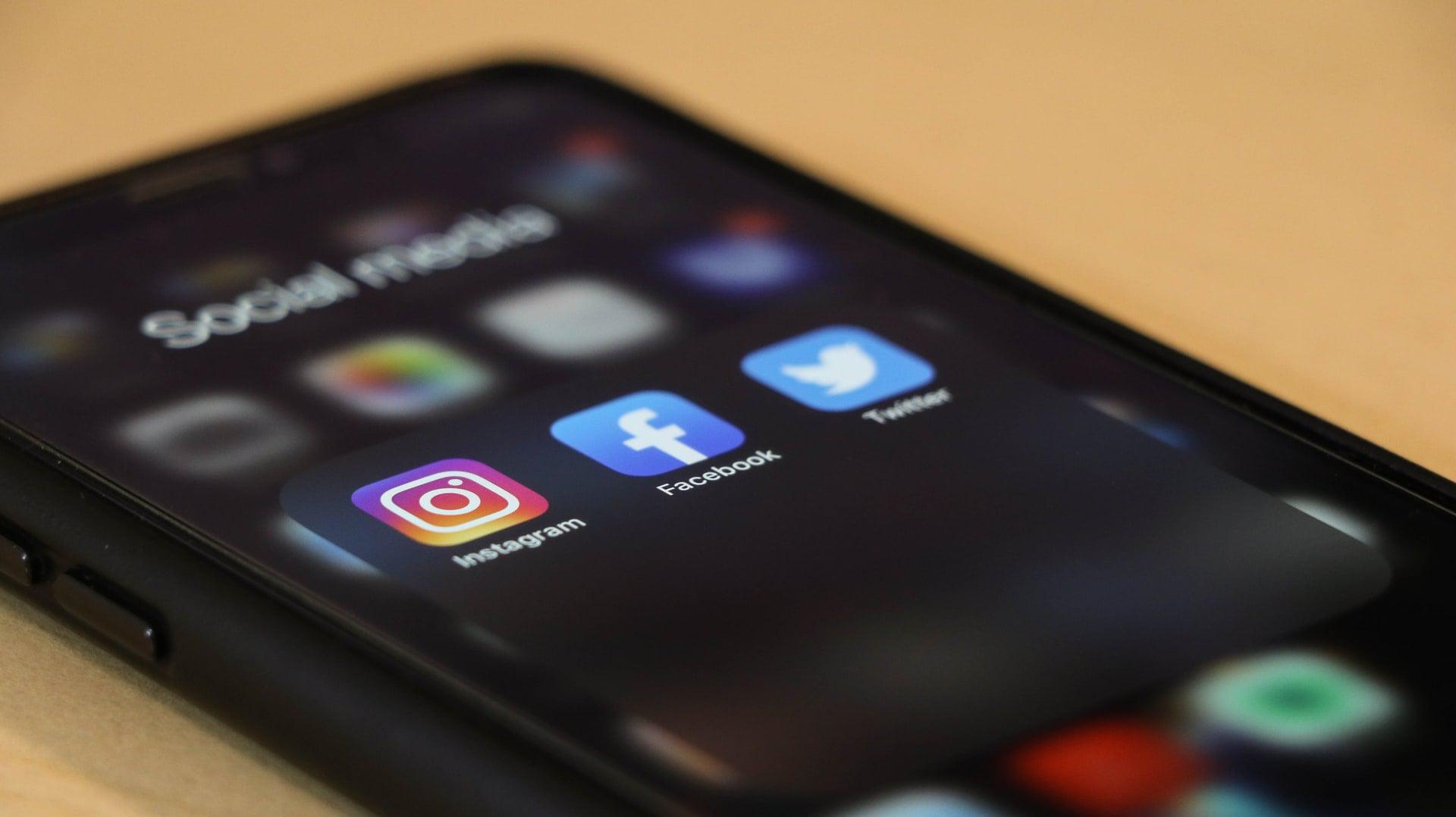 With far fewer physicians willing to meet pharmaceutical sales reps than a decade ago, life science companies are turning to newer channels in their quest to reach prescribers. One of the popular mediums is social media platforms like Twitter.

This makes sense. Like the rest of us, doctors are glued to their screens, spending an average of 2 hours per day on social media and messaging platforms. And similar to most users, their consumption is passive - around 90% of physicians use social media to consume content, with very few actively creating original content.

For pharmaceutical marketers this is good news. For one, social media affords metrics for measuring the effectiveness of campaigns, tying nicely into the emergence of data-driven marketing. It is also becoming clear that physicans prefer content that is directly relevant to their work as their tolerance for brand promotions is waning. Doctors are more likely to engage with content from peers or established thought leaders. Social media gives marketers the ability to deliver tuned messaging, based on the user’s profile.

The connections between doctors in the real world is well understood. Hospital affiliations, referral patterns and research relationships are frequently used to map links between physicians. But how does this manifest in the virtual world?

To answer this question, we analyzed the Twitter network for oncologists and allied healthcare professions (HCPs), e.g. urologists focusing on cancer care. A total of 1,527 HCPs in cancer care had valid Twitter profiles.. For these HCPs, we mapped out their various interconnections, broadcast activity, and more.

Oncologist influence map based on number of followers

Network map of oncologists on Twitter, with size of the bubble indicative of the number of followers 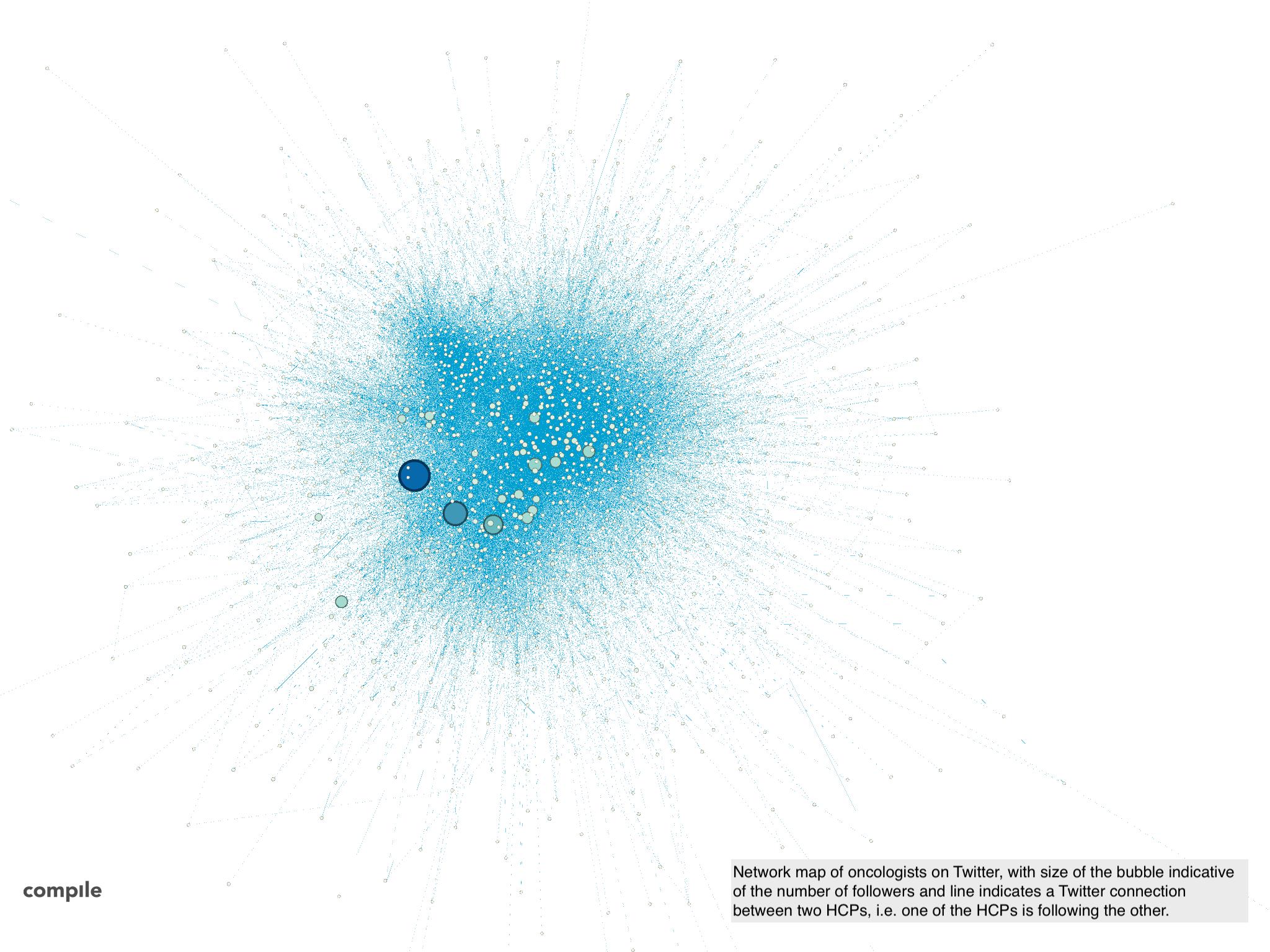 The diagram above maps all of the aforementioned HCPs. The size of a node is proportional to the number its followers, and a line indicates a Twitter connection between two HCPs, i.e. one of the HCPs is following the other.

The network shows a few large bubbles - indicating strong centers of influence. There are a few users who have a large number of followers and dictate trending topics. This is consistent with survey results that most doctors are passive consumers of content.

Does follower influence reflect influence of key opinion leaders (KOLs) in the real world? If social links are good predictors of influence, we should find a similar result when looking at HCP affiliations from real world data.

Network map of oncologists on Twitter, with size of the bubble indicative of the number of claims in past 6 months 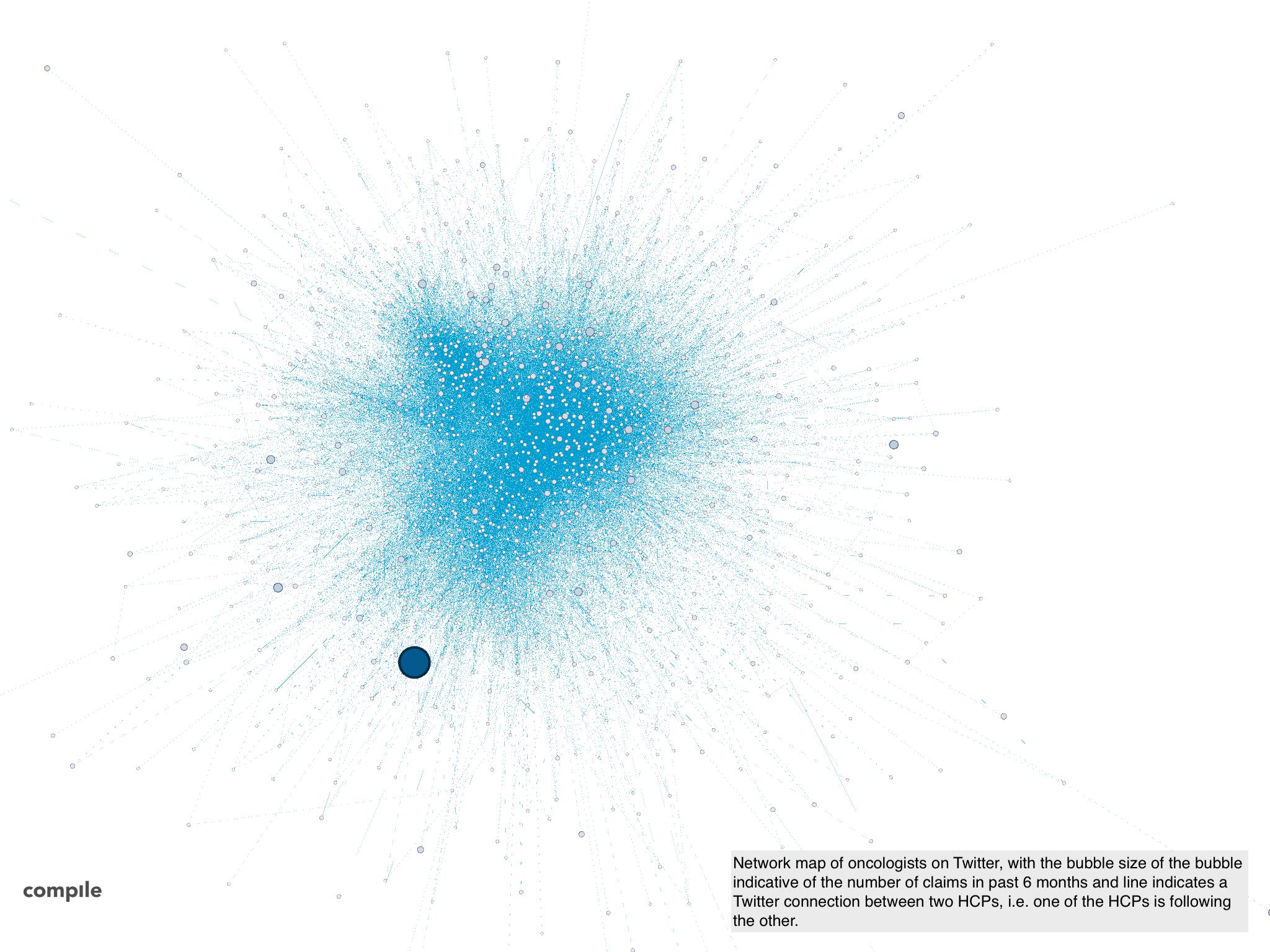 What we find instead is that the physician network looks very different - it is much more decentralized, there are hardly any oversized bubbles dominating the landscape here. This indicates that the medical activity of physicians is not directly correlated to their influence in the digital world. There are some doctors that are very active and influential on Twitter, but they don’t necessarily influence direct treatments. The inverse is obviously also true.

There are good reasons to use both the social network data and the claims data to find influencers. Each provides clues on the reach of a physician. Social data is skewed by the fact that there are far more passive consumers on the network than there are message creators. As a result, “silent consumers” of information aren’t that easily visibile. Real world claims data on the other hand has a strong correlation to a doctor’s prescribing influence. However neither is comprehensive, which is why over-reliance on either is problematic.

If we build the graph by combining both sets of data, the network is different from either one individually but still captures key insights from both sets.

Oncologist social map based on influence over peer oncologist

Network map of oncologists on twitter, with size of the bubble indicative of the network centrality of the oncologists. Larger bubble size indicates that the oncologist is more influential with peer oncologists 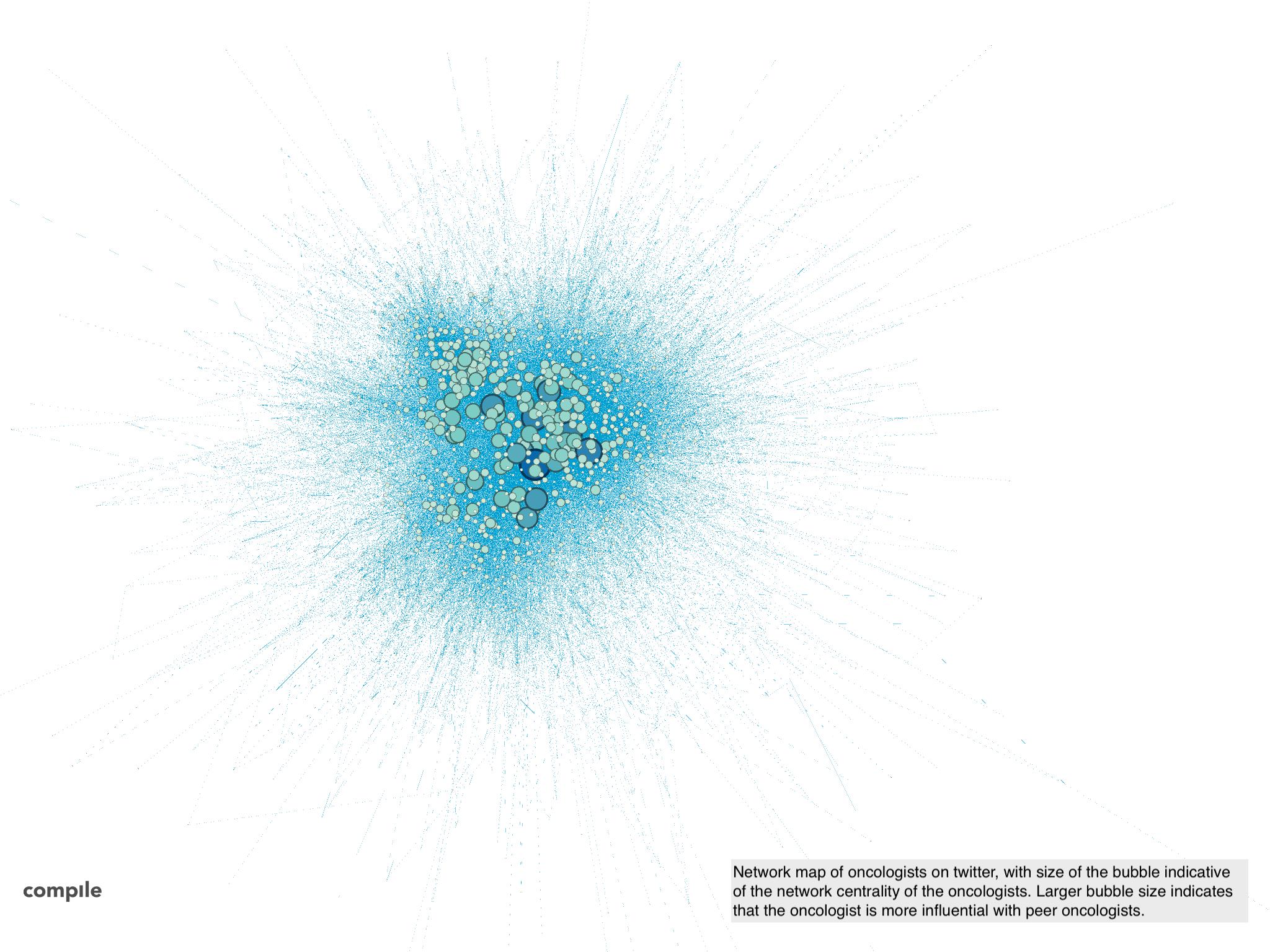 The diagram above normalizes the influence scores from social and real-world data to arrive at a composite influence score. The result is a graph that’s mid-way between the clustered social graph and decentralized claims-based graph.

This gets clearer when we plot the influence against the follower count for each oncologist. The relationship between the two isn’t linear.

Top 20 oncologists, based on their social media reach

Based on network centrality, profiles of the leading oncologists 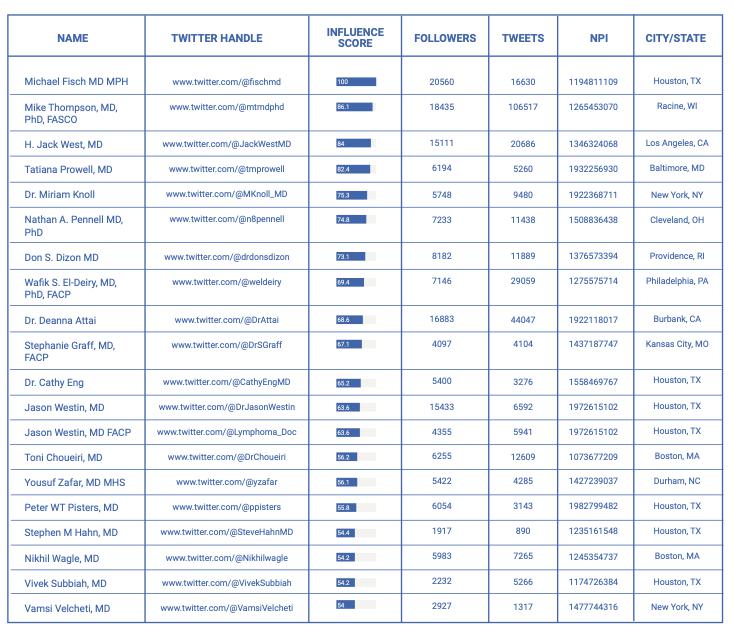 Whatever databases or masterfiles you use, a good approach is to combine multiple lenses when trying to get to the right picture. No data source is comprehensive and the two in this case are complementary enough to fill each other’s gaps. Whether finding a speaker list for your event or getting a target list for your campaign you’re better off leveraging data that takes a complete view of networks.

Want to know more on how Compile can help with your commercial strategy? Talk to us.